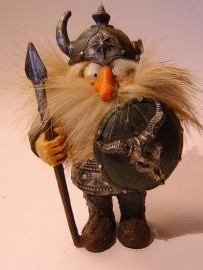 Sweyn Forkbeard was a 10th century king of Denmark and England, but is best remembered for having the coolest regal name in history.

During the second half of the 19th century, it was so popular that more than 8,000 people changed their name to Sweyn Forkbeard, including the entire population of Lorbottle in Northumberland.

The king’s last known descendant, Swendy Forkbeard, died in 1974, after being disqualified from the Eurovision Song Contest for attempting to set fire to the hair of Italian songstress, Gigliola Cinquetti.

Swine Porkbread, a traditional Hungarian loaf of unleavened rye shaped like a pig’s trotter, has no connection with the king.