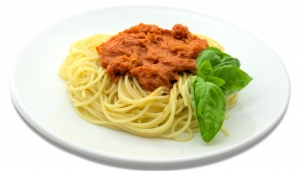 In the main, Italian food was invented by the Borgias to poison popes and this explains why it is so bad.

Italian bread was developed for the discus events at the Rome Olympics of 1964, while lasagne was an earlier, unsuccessful attempt at thermal insulation for Mussolini’s Alpine troops. No-one has ever satisfactorily explained how pasta came into being, though the most plausible explanation traces it back to Roman times, when a similar material was used to resole sandals.

It is significant that none of the aforementioned food features in any renaissance masterpiece (apart from the infamous Madonna of the Tortellini, which later transpired to be a Tom Keating fake) and according to Vasari, the Mona Lisa is smiling because she has just finished a shepherd’s pie.

Parmesan is Sicilian in origin and is traditionally made from the feet of retired mafiosi, while Parma ham is usually hung in olive trees and conditioned with volcanic ash until it is rigid.

Panna cotta is Italian for ‘phlegm’.