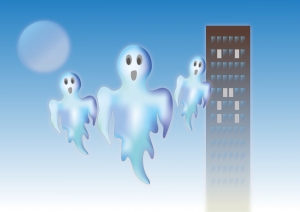 Ghosts have been part of our culture for almost as long as people have been dying and there is now a considerable body of evidence that proves their existence beyond doubt.

The most recent figures suggest that up to 19% of pensioners have personal experience of ghosts or related occurrences, with some 4,000 eye-witness accounts logged by CRAP (Central Register of Apparitions) during 2012 alone.

The most common sightings were children with skipping ropes, elderly ladies in rocking chairs and panting women at potters’ wheels, while the least frequent included a one-legged man on a penny farthing, a chimney sweep with a pet otter and a head with a body under its arm.

The vast majority of ghosts are harmless, even friendly, and have helped people find lost property, decorate the spare room and play the cello. Even poltergeists have proved more playful than malevolent, mischievously replacing the contents of spice racks with arsenic, moving garages from one side of the house to the other and gluing children together by the buttocks.

If you are troubled by a ghost, a catholic priest or an unemployed character actor can offer a blessing on your home, and in 99% of cases, this solves the problem and may even gain the priest a small non-talking role in a period drama on BBC4.

Having a resident ghost will usually increase the value of your property – unless it confines itself to the attic, in which case, it’s probably a squirrel – and haunted houses in general have outperformed the market, even in the depths of the recent recession.

Ghosts with particular domestic skills, such as opening and closing doors, using an iron or bleeding radiators, are even more valued, and most can be trained to contribute to the home on a daily basis given a little patience and understanding.